You put a status symbol where my android phone is supposed to be!

That’s sort of the vibe I get from the Nothing Phone (1), the debut smartphone from OnePlus co-founder Carl Pei’s new startup Nothing. The company made its grand entry into the tech landscape last year with the Ear (1) earbuds, which were fly as hell, but wouldn’t wreck your bank account and didn’t have all of the performance perks you’d get from more expensive earbuds like the Beats Fit Pro.

The Phone (1) takes a similar path and winds up in a similar place. This is, first and foremost, a mid-range Android phone. You won’t get top-of-the-line performance or specs like you would out of a Samsung S-series handset with a four-digit price. It starts at just £400 (around $475 USD), and if you’re wondering why I started with British pounds, it’s because you can’t actually buy the Phone (1) in the US right now. Nothing has said there are no plans to bring the phone to the US or Canada prior to launch. That said, folks in other markets can get one through a retail partner or even special kiosks in London, according to Nothing’s website.

If you can get your hands on one, the Phone (1) is certainly one of the coolest-looking phones around. Whether or not it’s actually worth buying in a crowded mid-range Android environment is harder to grasp.

Baring it all.
Credit: Molly Flores/Mashable

The first thing anyone will notice about the Phone (1) is its transparent back case, which gives you a limited look at the inner tech workings of the device. The Ear (1) did the same thing. It was extremely endearing to me then, as someone who grew up in the age of clear Game Boys, and it’s still extremely endearing to me now. Being able to see things like the big, circular wireless charging coil in the middle pushes all the right buttons for me.

And if you look at it long enough, you’ll see a series of lights strewn about the back that serve to give the Phone (1) something hardly any other phone provides: light-based notifications. This is what Nothing calls the Glyph interface, which can be customized from the settings menu. There are a bunch of different light-dancing patterns to choose from for both phone calls and other notifications, and you can even sync different patterns with different contacts. Heck, you can even make the phone turn on every light at once while the camera is open, turning it into what they call a portable ring light. 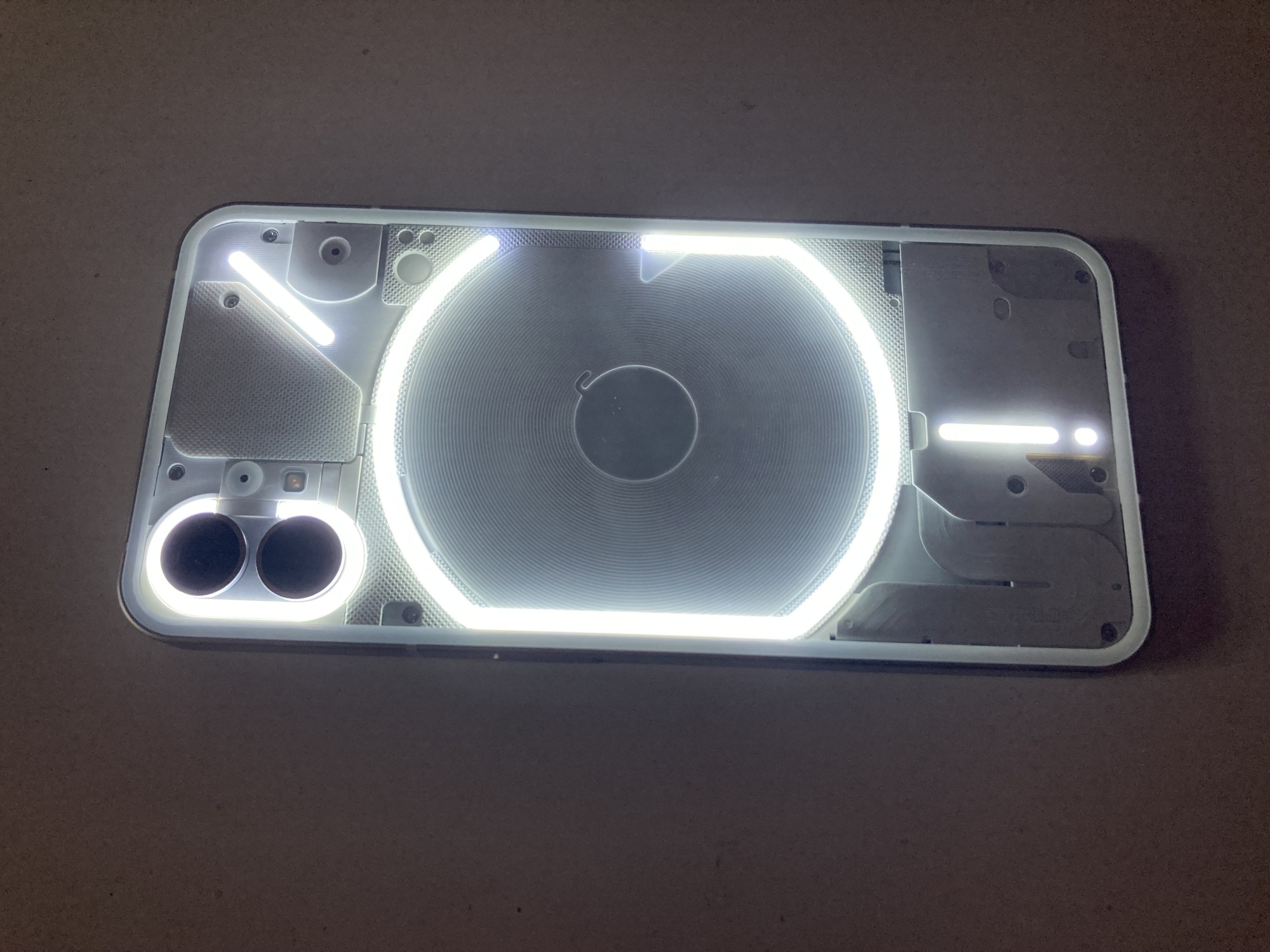 Can your phone do this?
Credit: Alex Perry/Mashable

The idea here is that you’ll be able to turn the Phone (1) over on its face and minimize screen time without compromising your ability to answer calls or respond to important messages. I didn’t have a compatible SIM card (what with my being in the US and all) during my hands-on time, so I can’t comment too much on this functionality. But based on samples in the settings menu, the lights flash a little quickly and might be hard to notice out of the corner of your eye.

Whether or not the Glyph interface is actually useful, it is at least still pretty cool looking. I like a phone that looks like tron, straight up. It also feels great in the hands, with a sturdy aluminum frame that seems like it could withstand plenty of physical trauma. There’s a power button on the right and volume buttons on the left, making it functionally identical to an iPhone in that regard.

At 6.55-inches, the OLED display is sizable without requiring the use of two hands (at least for me), and the HDR10+ compatible display looks real sharp and smooth, thanks to a 120Hz variable refresh rate. It’s a shame, then, that performance isn’t quite as smooth.

When it comes to interior specs, the Phone (1) is a little less flashy than its exterior would indicate:

Those RAM and storage numbers are certainly adequate (I’m not enough of a photographer to fill up even a 64GB phone), but the mid-range Qualcomm chipset powering the Phone (1) was the most disappointing aspect of my time with it. This is an older chipset than the one powering more recent Android flagships like the Moto Edge+ and the Samsung Galaxy S22which isn’t hugely surprising given the more affordable price, but it does produce somewhat mediocre performance.

Even with a buttery smooth 120Hz refresh rate, certain activities on the Phone (1) just feel slow. Twitter, in particular, hitches up for milliseconds at a time while simply scrolling down my timeline. It’s enough to be distracting. It even takes a couple of seconds just to load my DMs. I haven’t had this problem with other recent Android phones, so I don’t think it’s simply a matter of Twitter’s app being poorly optimized.

I even ran the phone through Geekbench‘s benchmarking software to make sure I wasn’t crazy. Sure enough, it came out with a lower performance score than not only the Galaxy S22, but even the Galaxy S21 from two generations ago. I will say that other social apps, like Facebook and Instagram, fared a bit better, and basic things like web browsing and watching videos on YouTube were certainly adequate. But nothing really impressed me about the speed at which the Phone (1) does anything.

Nothing OS is handsome, if a little bare.
Credit: Screenshot: Alex Perry/Mashable

Which is a shame, because I like the philosophy behind Nothing OS, the proprietary fork of Android that Nothing built for this phone. It’s not horribly different from vanilla Android, which is for the best; there’s a near total lack of bloatware, so as soon as you get past basic setup, you’re in business. No need to spend minutes deleting or sorting manufacturer apps off of your home screen. It also has a cool dot matrix font on its home screen widgets, but I wasn’t able to get any use out of its ability to remotely control a Tesla or display NFT’s because… I don’t own a Tesla and I sure as hell don’t own any NFTs.

However, one potential advantage of rolling with a less powerful chipset is longer battery life. I am impressed with Phone (1)’s longevity on a single charge, which the company rates at around 18 hours. Using it primarily as a social media/web browsing/YouTube device, I was able to get through about 18 hours of usage (give or take) before feeling the need to charge again. Whatever it lacks in top-end speed, it makes up for in gas mileage.

But the camera seems good

We’ve established that Phone (1) looks real slick but is merely fine as an Android phone. And while there are certainly better cameras in this price range out there, I will say that certain aspects of Phone (1)’s dual-50MP lens setup pleasantly surprised me. Namely, its Night Mode can really brighten up dark images without eliminating the nighttime vibe. Sometimes software-based nighttime photography can make photos look artificially lit, but in this case, the hammock and grill in my backyard came out looking appropriately night-y. 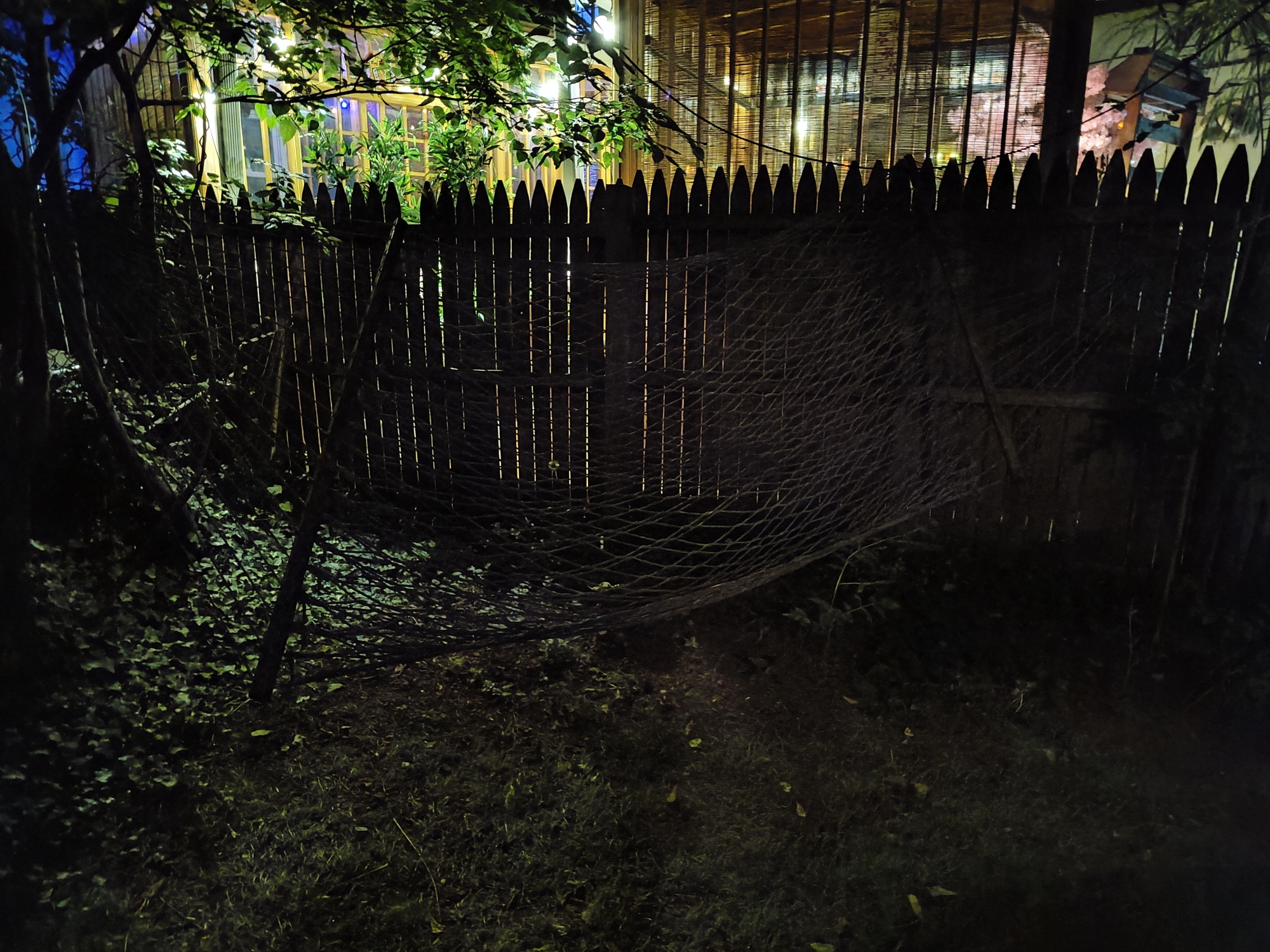 This was impossible to see without Night Mode.
Credit: Alex Perry/Mashable

I won’t even share the non-Night Mode equivalent because it’s almost entirely pitch black. The same goes for this photo of my grill. Both of these still carry a nighttime vibe without looking like they have studio lighting draped over them. 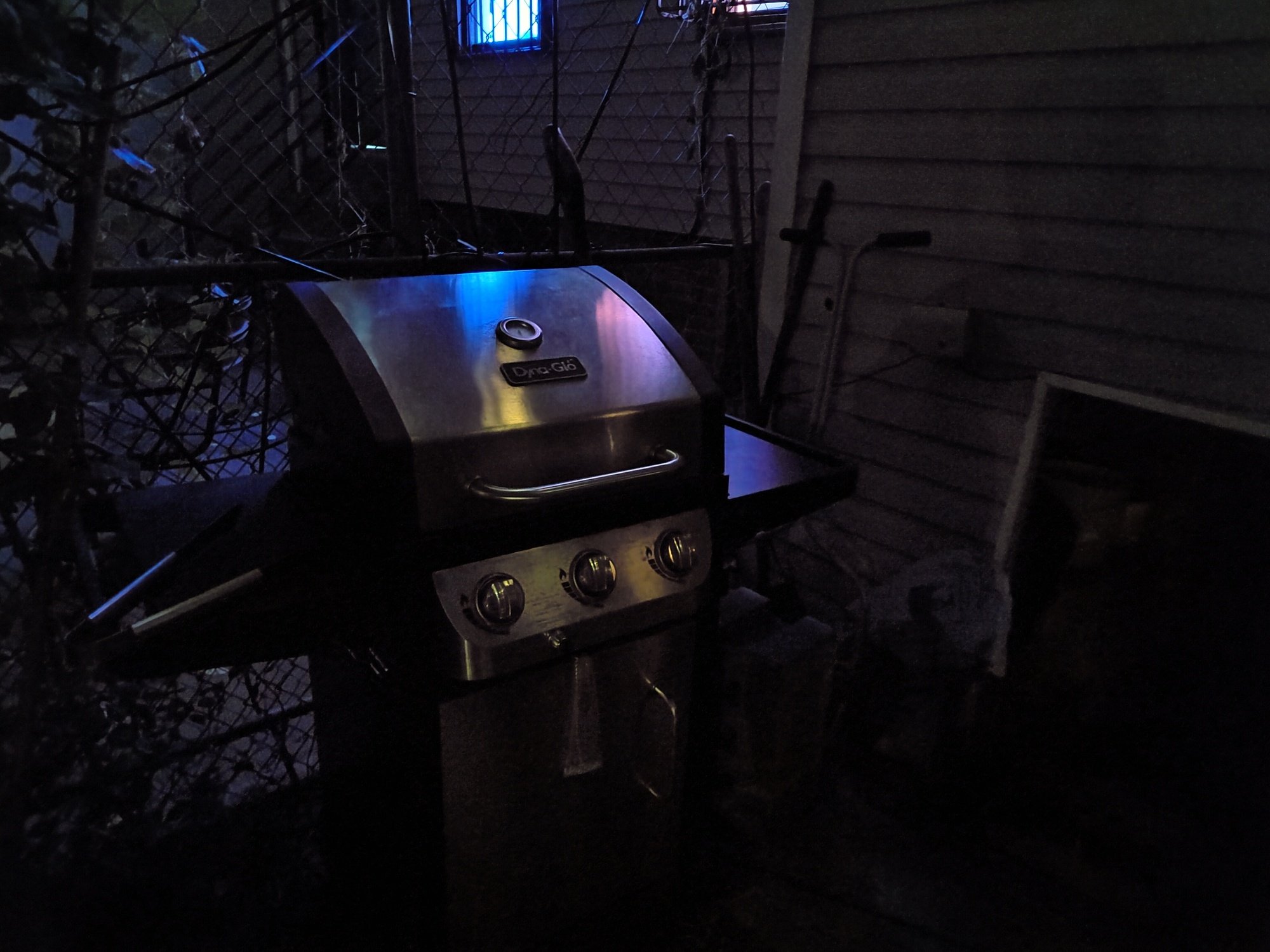 As was this.
Credit: Alex Perry/Mashable

There’s also a macro lens for getting real up close to things like flowers or, in this case, a feather in a plant pot. 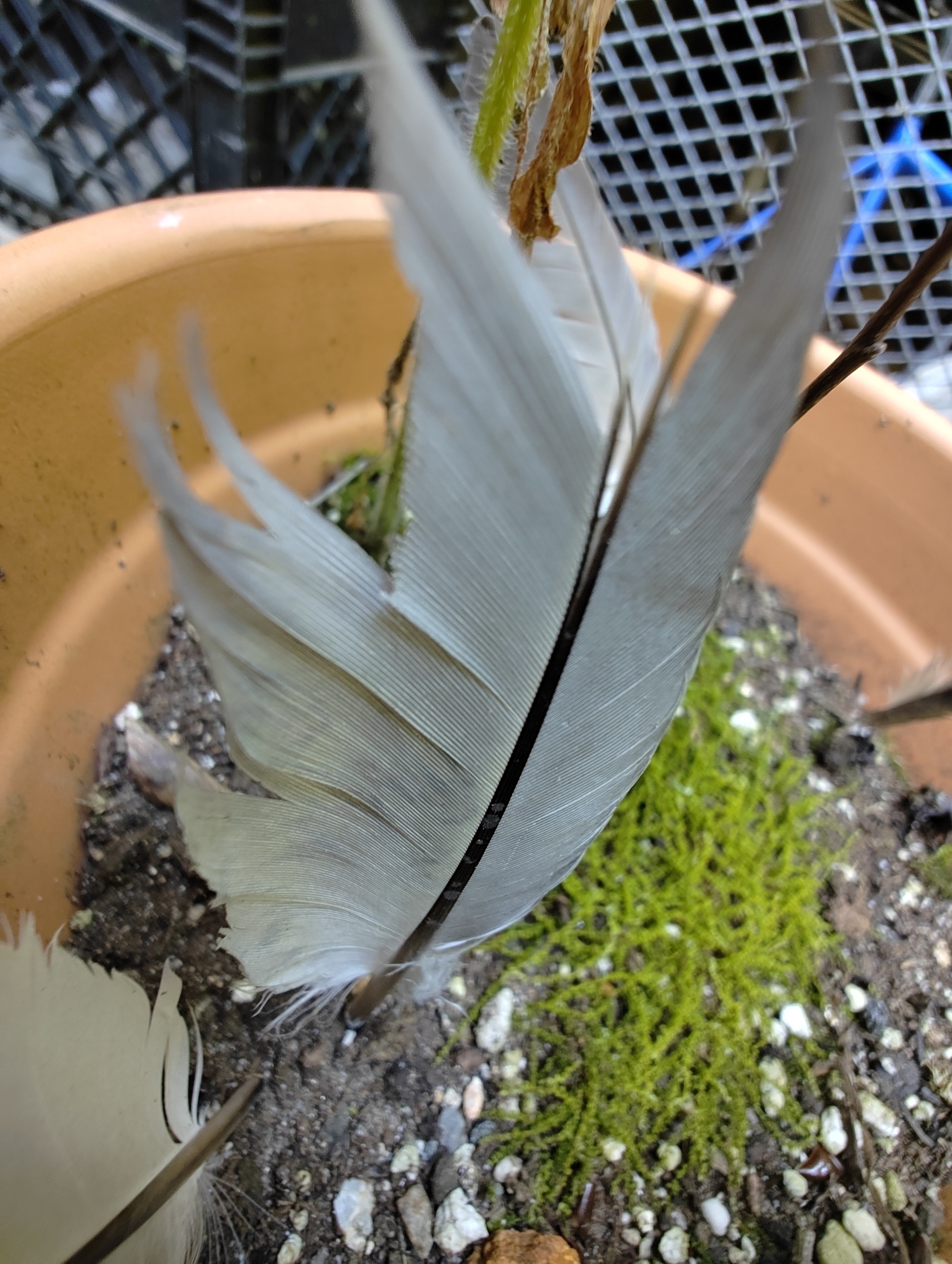 And when you just need to take regular photos, the default lens produces sharp, vivid images, too. 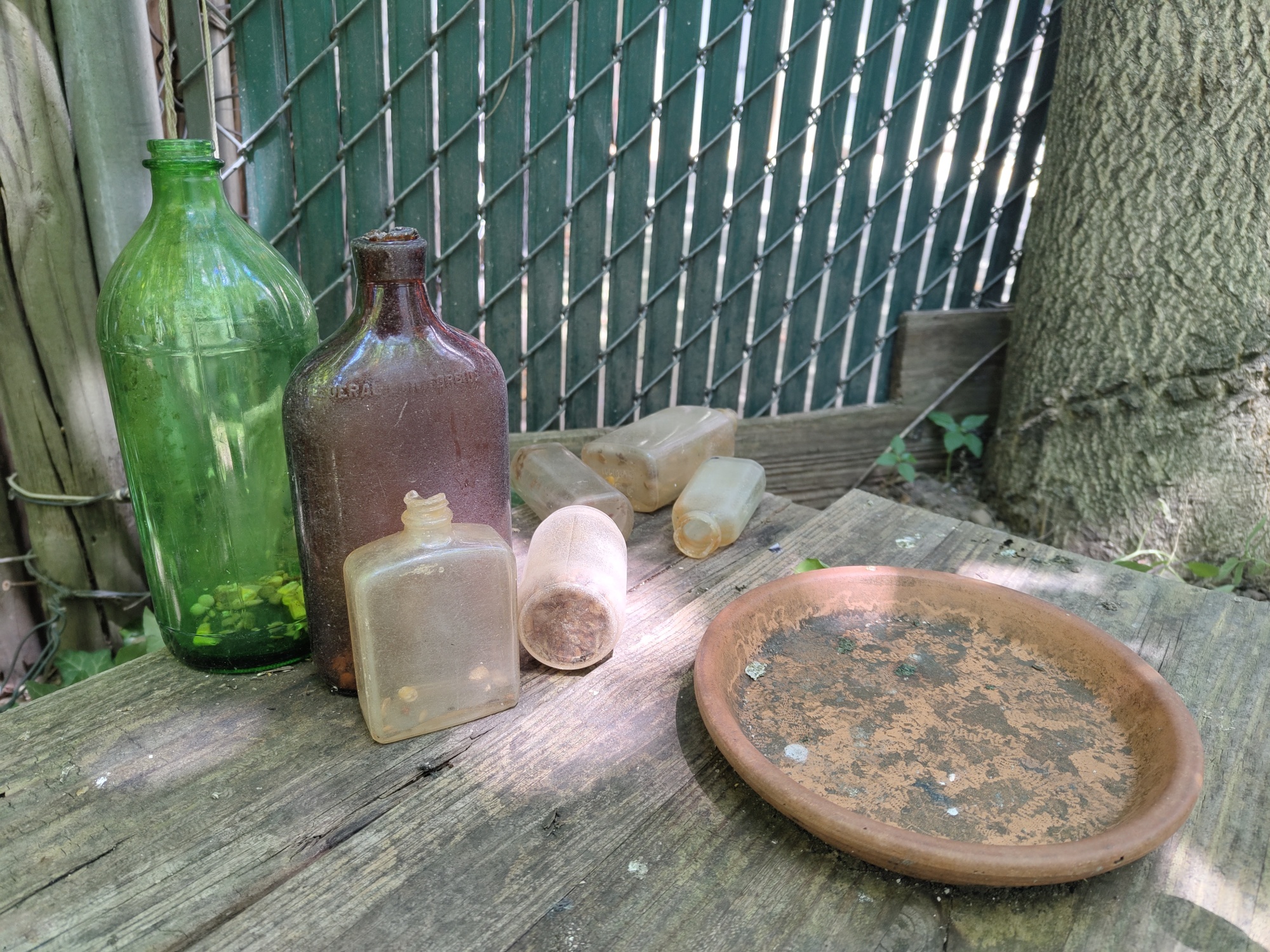 I can’t offer a comprehensive review of a phone that isn’t available in the states, but based on some extensive hands-on time with the Nothing Phone (1), I would advise Americans not to feel too torn up about its lack of availability here.

To be clear, this is a totally admirable first attempt at a mid-range Android device from a startup with only earbuds to its name until now. It’s got a super-fresh look and putting a bunch of flashing lights on the back of a phone adds a cyberpunk vibe I can really appreciate. I don’t know that those lights are actually useful, but hey, that’s just me. Nothing OS also strips Android down to its bare essentials and brings a nice aesthetic, even if the performance profile isn’t anything to write home about.

It’s even got a solid camera system, too. But so do the Pixel A-series phones, which are available in the US for very agreeable prices and run real smoothly.

Nothing’s debut smartphone may be decent, but there doesn’t seem to be much reason for us Yankees to feel FOMO about it.

We Asked GPT-3 to Write an Academic Paper about Itself.–Then We...

Beyond the Internet at Saenger

Cannondale’s new Topstone Carbon is perfect for your summer plans —...

Turn Your Android Phone Into a Google Home and More. ...

It makes perfect sense that the Nothing phone (1) isn’t coming...